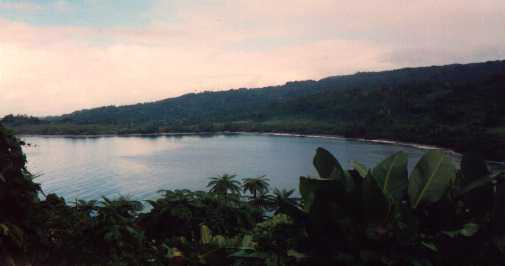 Our only connection was that I read a few of his books and we both lived at very different times in Vanuatu, or the New Hebrides as it was called during the war. On the surface, our Vanuatus were very different. Michener fictionalized Vanuatu in "Tales of the South Pacific", even moving around geographic features between stories. This is OK with me - the book was a collection of tales about people in stressful times, not a documentary. By the time I arrived four decades later, Bloody Mary and her fellow Tonkanese indentured labourers had been forcibly returned to North Vietnam in the '60s, and most of the French plantation owners had left or been deported after independence in 1980. Affordable air travel and better cargo transport had made life easier for expatriates, and ni-Vanuatu life had been transformed for better and worse by increased exposure to the outside world and the acquisition of political power.

Nevertheless, our Vanuatus were basically the same place. Michener really caught the spirit of the tropical Pacific; I admire him for not jumping on the Western media bandwagon and portraying the region as an unspoiled tourist playground full of happy natives. Overall, he judged it a "paradise", but he knew it had its share of dangers and discomforts.

His book about the Pacific that I enjoyed the most was "Return to Paradise", a follow-up to "Tales of the South Pacific" that contained factual essays paired with fictional short stories about several Pacific island groups. One story told the tale of an expat who went to a dance where he recognized a Polynesian girl from the boat he had come to town on that day. Nothing was going to stop this island girl from having a good time; she was out on the floor dancing up a storm, and at dawn he saw her again wandering wearily down the street barefoot, sandals in hand. A few days after reading this story, I was at one of Port Vila's clubs and saw this same girl's descendent-in-spirit stomping out a rhythm to a furious Tahitian beat between disco numbers.

After leaving the dance in the early hours, my wife, friends, and I ended the evening swimming in Mele Bay where the phosphorescence swirled off my arms treading water in the dark.

That is how I remember Michener's South Pacific, and I thank him for enhancing my experience.

Back to main page.